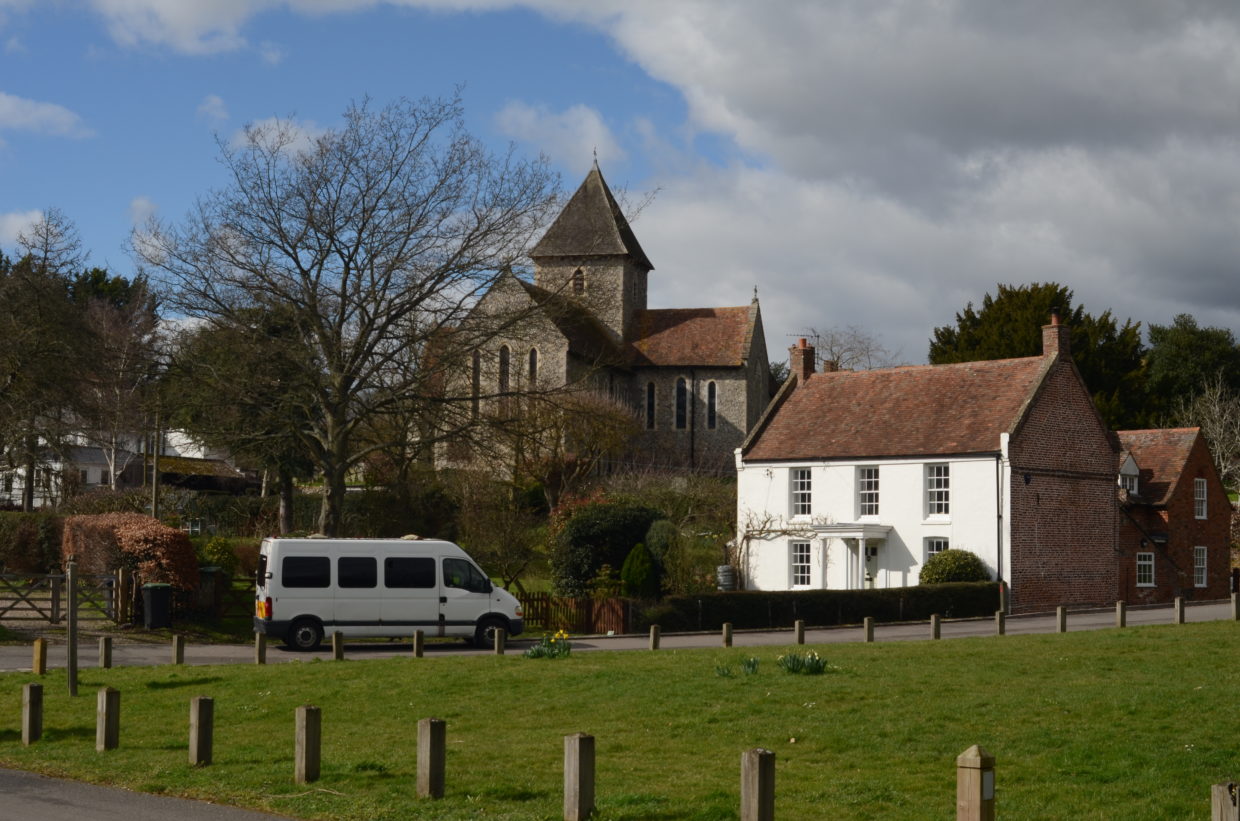 March saw us travelling over 2,000 miles to Dorset, Hampshire, West Sussex, Kent and Northumberland for 10 concerts. A 13 day trip with 9 gigs (2 on the last day!), followed by a trip for a concert in the Newbrough Town Hall near Hexham. To be honest, it was mixed! Some concerts were fantastic, others not so great. Both of us were unwell at points during the tour too.

We drove down south from Edinburgh on a very wet Wednesday, stopping overnight in Ely. There was “work to rule” industrial action by French customs officials in protest of a possible “no deal” Brexit, and almost every layby on the A1 was full of lorries queuing (aparently it was taking 10 hours to get through customs at the ferry ports!).

On Thursday we headed to our first gig – Corfe Castle in Dorset. A beautiful, ancient village with lots of history (and a castle!). King Edward was murdered there by his stepmother in AD 978.

Despite being featured in the local newspaper and in the February & March editions of “The Corfe Valley News”, the concert was not well attended unfortunately. However, those who were there were appreciative, and it was nice to see our friends Simon & Leander again from Cornwall who were in the area for a few days.

On the Friday we had croissants and coffee for breakfast in our Tour Bus in the historic market town of Wareham, overlooking the (very full!) River Frome. Then made a trip to Bournemouth, which neither of us had been to before.

Our gig that evening was in the beautiful village of Dummer near Basingstoke. It was a really nice gig with a very warm, friendly, enthusiastic (and decent sized!) audience. An encore was duly supplied!

We were plied with several bottles of wine at the end of the night, that had to be drunk since they had been opened that evening………a tough job, but somebody has to do it!

The mains lead for our lighting controller broke at the Dummer gig. So after breakfast in Basingstoke, we hunted out a replacement. We found T.L.C. Electrical Distributors in the Houndmills Trade Park in Basingstoke. What fantastic customer service! Friendly and helpful from the minute we walked through their door. They found a replacement immediately (for just £13). We checked it worked, and the boss appeared and looked at our lighting controller in amazement. “What is it?” he asked, and “Do you know how to work all those buttons and sliders?“. “Yes!” I replied. We went away very happy indeed!

We headed on to Lenham near Maidstone in Kent for our concert that night. Another picturesque village. Someone had done a great job advertising the gig – there were posters everywhere!

It was a really, really nice audience. There was a buzz about them from the minute they arrived. We received a very nice reception indeed. Very friendly people. Someone said to me in the interval: “I think that’s the best version of “Body & Soul” I’ve ever heard!” Huge applause after each tune and at the end. An encore was duly supplied! An extremely enjoyable and memorable night for us.

Our gig on the Sunday night wasn’t too far away – Adisham near Canterbury. So we headed over in that direction and had a look at Deal on the south coast of England. On the way there, we saw some unusual road signs!

The first one seemed to be offering some sort of sandwich deal. Presumably a sandwich, a bag of crisps and a soft drink. But it didn’t say what type of sandwich……..but the sign around the corner did!!!

Our gig that night was in the pretty village of Adisham. The hall was small (as was the audience!), but they were very appreciative.

In the interval of our concert, someone told us that Ian Fleming had written one of the “James Bond” books ( “You Only Live Twice” – made into a film in 1967 starring Sean Connery) nearby in a place called The Duck Inn at Pett Bottom (!) in 1964. “Pett Bottom” could easily have been the name of one of the SPECTRE enemy agents that James Bond “connected” with in these films! We had to have a look at that the next day! It was in a really beautiful location. You could easily imagine him sitting there with his typewriter looking at the beautiful rural view out the window. Apparently, there was a bus stop near there where the London to Dover bus stopped. It was bus number 007…..

We had a couple of days off, and went to stay with Dom’s parents in London. It was really nice to see them both again, and also to see Dom’s older brother and sister-in-law, Adrian & Beverley for lunch. Unfortunately, Dom came down with some sort of “Man-Flu” whilst we were there.

Back to work on the Wednesday after two very nice days with Dom’s parents. The gig was at Preston near Weymouth in Dorset. Another quiet one unfortunately.

We had the next day off, so we did some touristy things, visiting Portland Bill, the Verne High Angle Battery and Durdle Door. Verne High Angle Battery was built in 1892 to house 6 guns to fire at a “high angle” at enemy ships. It was used until 1906. There was a large laboratory and a bomb-proof shelter there too. Sadly, the car park at Durdle Door charged £15 for campervans to stop there, so we didn’t hang around! Shocking!

We stayed the night in Poole, surrounded by brand new multi-million pound yachts. There must have been 50 or more of them near Poole Quay!

On Friday, we didn’t have far to go to the next gig so we decided to explore Salisbury, which neither of us had been to. Not only is there an amazing cathedral there, but it houses a page of the Magna Carta – the charter of rights agreed to by King John of England at Runnymede, near Windsor, on 15 June 1215.

Whilst we were in Salisbury, we came across a school demonstration against Global Warming, and the lack of attention the government is giving to it. This was happening all over the country.

Our gig on Friday evening was at Woodgreen near Fordingbridge in Hampshire. We had played there before about 4 years ago. We arrived to find 5 or 6 New Forest ponies in the centre of the village. We received a very warm welcome at the hall and set up our gear. What an amazing gig this was! It was very busy, and the audience were fantastic. Enthusiastic, long applause after every tune. An encore was duly supplied!

Unfortunately, although Dom was feeling better, it was my turn to be ill. A severe stomach bug (yep, both ends!!!). Saturday was very difficult. I spent the day lying down, eating nothing and rushing to the toilet or being sick behind bushes. We had to cancel a lunch date with our friends Steve & Louisa in Southampton. Somehow, we made it to the gig that evening in Barnham in West Sussex…..and got through it.

On Sunday, we had two gigs. Luckily, I was feeling much better! The first was in the beautiful village of East Meon near Petersfield, in the Meon Valley. We were met with a very warm welcome at the hall by Hev, and set up the hall for our afternoon concert. (Gardeners Question Time on BBC Radio 4 was being recorded there the following Tuesday.) The audience was very appreciative and friendly. An encore was duly supplied!

Our second gig that day was in Bordon at Forest Community Centre. A former army base, it was now developing as a village. Sadly, the audience numbers here were disappointing. However, we had a few days off to return to Edinburgh (and get well!) before our gig near Hexham in Northumberland the following Saturday.

Newbrough (pronounced new-bruff) lies on the banks of the River South Tyne in Northumberland, near Hexham. Hadrian’s Wall is very near. Although it is a village it has a Town Hall – where we played. Apparently, a king stopped off in Newbrough on his way to Scotland, thereby making it a borough and enabling it to have a town hall. Its a beautiful hall, built in 1876 and given to the village. The acoustics were great. Another very appreciative audience, making this an extremely enjoyable end to our 10 gig trip.