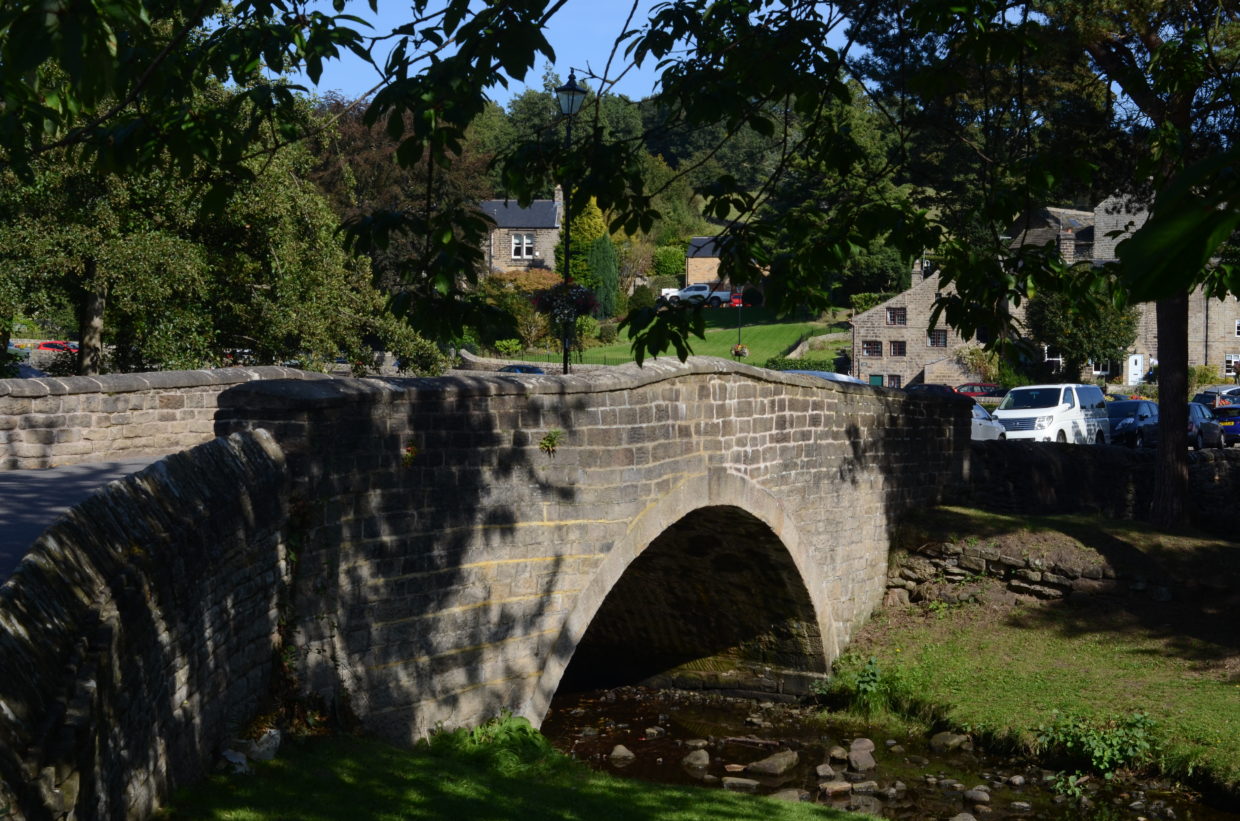 September continued with concerts in Yorkshire and Derbyshire. It was our first trip south into England since the Edinburgh Festival Fringe. We were blessed with some absolutely glorious late summer/early autumn sunshine! Our first concert was in Leathley, just south of Harrogate, near Otley in the beautiful Washburn Valley. The painter JMW Turner roamed this area with his sketch book.

The historic church of St, Oswald was across the road from the village hall. Much of the original 1100AD building remains (the tower and east and west walls of the nave are from this period). Other parts date from 1472. The Norton-Fawkes family live in nearby Farnley Hall and are related to the infamous Guy Fawkes, the conspirator who famously failed in his attempt to blow up the House of Lords at Westminster in 1605!

We had a full house for our gig! An encore was duly supplied.

The next morning we headed east to our concert in Wrelton near Pickering in the North York Moors National Park – another very beautiful part of the country.

The start of our concert was a bit unusual. As I took in a large breath to play the first note…..I swallowed a small fly!!! Somehow I managed to recover (Dom played on). A warm friendly and appreciative audience, and another full house! Encore duly supplied.

We had already planned to stay the night in Scarborough after our concert in Wrelton. It was only 20 or so miles away and its a place we like very much – not least because it’s a good place for a run in the morning. Indeed, I managed to fit in an 8 mile run the next morning (some of it barefoot) in glorious sunshine – a great way to start the day!

We saw some interesting road signs on the motorway and in motorway service stations. Brexit looms…..

After returning to Edinburgh for a few days, we headed off down south again for the last two gigs of the month. We decided to break the journey up a bit and stopped at Scarborough again the night before. After a Chinese takeaway and a 5 mile walk along the promenade from North to South Bay and back, we settled down with a beer or two. The next morning, I fitted another 8 mile run in along the coast. One of the great things about running in Scarborough, is that everyone is really friendly. People walking to work, dog walkers, other runners, all smile and say “hello“. It was a stunningly beautiful day, with the sun rising up from the sea. Again – a great way to start the day!

Our next concert was in Low Bradfield near Sheffield. Although only 7 miles from Sheffield (England’s 4th largest city), you wouldn’t know it. The countryside is absolutely stunning. Lots of very steep hills and valleys, reservoirs and rivers, and beautiful stone cottages and farms. Low Bradfield is very picturesque. It is set in a “bowl” with hills all around. The centre of the village has a green, which was given to the village by the Ibbotson family who lived at Burnside House.  It has within it, the cricket ground, bowling green, tennis courts and the village hall where our concert was. Bathed in glorious sunshine, I think we saw the village at its very best!

The village grew up around a farming community where Agden Beck and Dale Dike meet to form the River Loxley. Bradfield means “broad stretch of open countryside“.

Although it wasn’t our busiest gig, the audience were very warm, friendly and appreciative. An encore was duly supplied.

Since I had run 8 miles at 7am that morning, I wasn’t intending on running the next day. However, I was persuaded (badgered?!) into going for a 4 mile run around a nearby reservoir by the barmaid in the hall and by the village hall chairman, Jim.

I was very glad I did! There was a tree-lined, woodland path that went around Damflask and across the damhead itself. It was a really enjoyable, scenic run with the mist hovering just above the reservoir, and rowers in sculls swishing silently past.

The reservoir was built in 1867 to provide water for the people and industries of Sheffield. It takes its name from the village of Damflask that was almost entirely washed away in 1864 when the Dale Dike dam burst, causing the Great Sheffield Flood in which 250 people lost their lives.

We headed south to our last gig in September – Repton, the “historic capital of Mercia“, about half way between Derby and Burton-on-Trent. The stunning sunshine and warm weather continued and we managed to find some time to walk along the towpath of the Trent & Mersey Canal which links the River Trent with the River Mersey.

We travelled the short distance from Willington to Repton. Repton dates back to Anglo-Saxon times and was the place where Christianity was first preached in the Midlands.

We were performing that evening in the brand new Repton Village Hall, finished just three weeks before our concert. Its a beautiful hall with everything you could ever ask for inside.

Over 40 people came to see us play, including a young boy who sat in the front row listening to every note. He played the saxophone and piano and was Grade III on alto sax and Grade V on piano. It was a very friendly and appreciative audience. Many of them talked to us in the interval and at the end. Two people told me that they found my tune “Gemma” very moving. Fantastic. An encore was duly supplied. It was a joy to be performing in a brand new hall. We wish them luck with future events there.