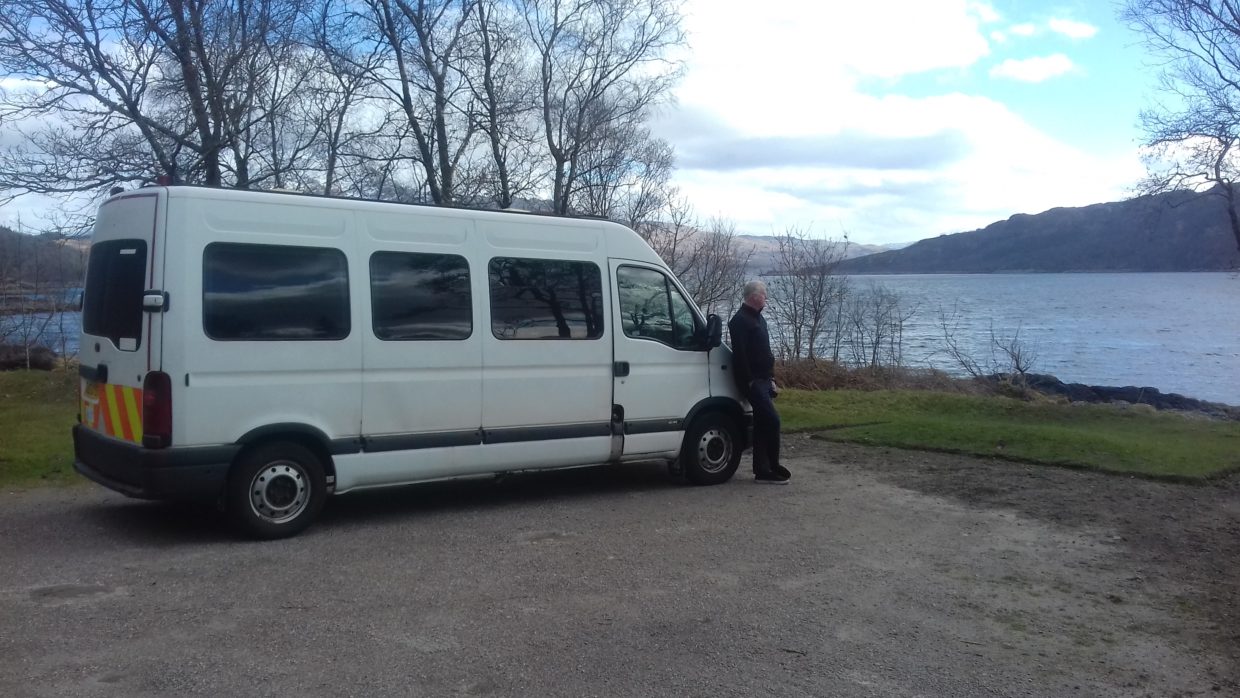 Many of you have asked about our Tour Bus and its conversion from a Yorkshire ambulance. So here’s a blog post all about it.

On tour, we used to stay in budget hotels – mostly Travelodges or Premier Inns. They were basic, but absolutely fine. But because the rooms are identical inside, you never really know where you are. They also tend to be on the M6 or A1 and are often 50 or more miles away from the gig. So there was a lot of extra travelling & fuel cost going from hotel to gig and back. Also, they were also becoming more & more expensive (especially at the weekends), and of course, you have to eat every meal out – although we kept the cost down by mostly eating in the cafes at Morrison’s, Tesco’s or Sainsbury’s Superstores.

One day, after discovering Mike Hudson’s blog at vandogtraveller.com, we decided to buy a van to convert into a mobile home to make our trips more cost effective, and more fun! After a lot of research, we decided that an ex-ambulance would be best:

This last point was important because (a) we’re not a couple, so need 2 beds (whereas most MotorHomes have one double bed), and (b) we had specific needs for carrying our equipment.

Every time we saw an ambulance in the street after that, we gazed it it with envy, thinking “wouldn’t it be great if we had one of those…”

After going to see a few, we eventually found a Yorkshire ambulance for sale on eBay that we liked the look of. It was a Renault Master van and although we bought it “blind”, the guy selling it seemed very decent and trustworthy. He even took the trouble to take it through it’s MOT for us.

It was in Nottingham, so we took the train there from Edinburgh, and then the tram in Nottingham – the van was just a short walk from the last stop on the tram line.

Although the ambulance had already done 200,000 miles, it felt “right”. These vehicles are designed to do lots of mileage. So we excitedly drove it home to Edinburgh.

Now the hard work started. We had to remove the “ambulance” stickers and the yellow & green florescent squares. It took days on end with scrubbers, white spirit and washing up liquid. Quite a job! We also had to remove the (very, very, very heavy) lift at the back doors and take out some of the seating.

We put dark tint on the windows for privacy and started to build the interior to suit our needs. Bear in mind that neither of us really had the skills to do this! We were making it up as we went along.

But a couple of months of hard work later:

We kept two of the seats on either side of the sliding side door, since they were useful for eating at the table (and also they had seat belts fitted for any extra passengers that we might have). We put carpet on the floor and halfway up the walls for extra insulation and to make it feel homely inside.

We were able to have it reclassified by the DVLA as a motor caravan. Fantastic! We were up and running!

Meanwhile, back on tour…..we discovered almost immediately, that village halls were very happy for us to stay overnight in their car park. Not only does this mean that we have no accommodation costs, but once we’ve packed our gear into the van at the end of the concert – we’re already “home” for the night! Being able to cook meals, make coffee, wash etc in our van also saves us a lot of money whilst touring – and its great fun too! Here’s some photos of the finished Tour Bus:

……and some of the places we’ve visited: