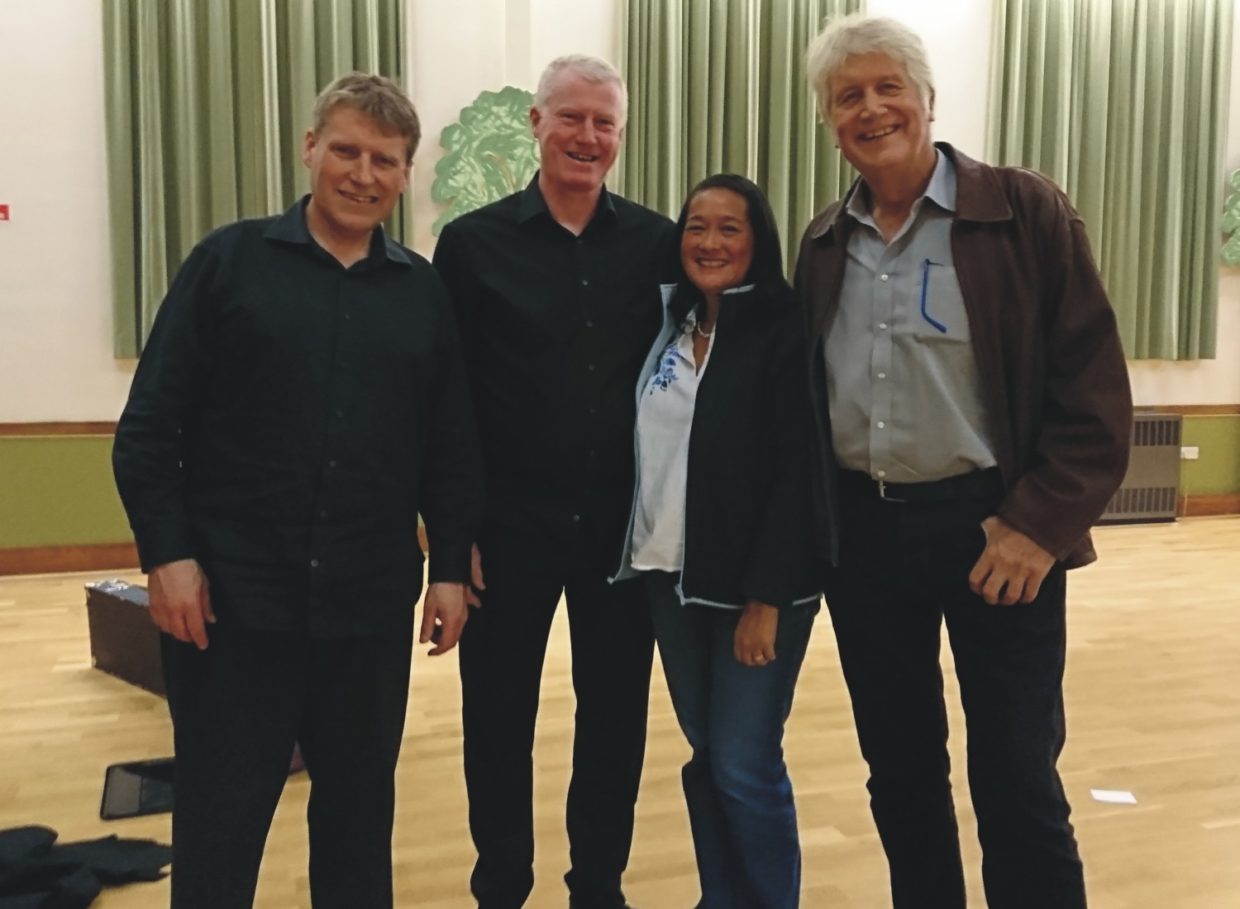 We headed off down to the south coast of England for five concerts.  We travelled over 1,400 miles and met some really nice people.

However, about an hour into the journey from Edinburgh, as we left Berwick , we heard a rattling noise from the engine.  It stopped fairly quickly, so we continued our journey.  About an hour later, the engine made another disturbing noise and “STOP” appeared on the dashboard!  We were on a single carriageway part of the A1 in heavy Friday afternoon traffic.  Luckily a layby was nearby, and we managed to pull into it just in time (lucky thing #1)!  We called the RAC – they said they would send a relay vehicle within 45 minutes, so we made a cup of tea.  An hour an a half later, we phoned them again.  This time they said it would be another 45 minutes!  So we made another cup of tea.  A tow truck big enough to take our Tour Bus eventually pulled alongside.  The RAC only have 2 of these in the North East of England.  The private company that the RAC called have 20 of them (they cost £125k each!!!) – (lucky thing #2).   In the meantime, we had to find a garage that could fix our van – late on a Friday afternoon.  We could only find one place that would do it (lucky thing #3).  They were able to order the part for us (lucky thing #4).  It arrived at the garage about 2 minutes before we did (lucky thing #5).  The guy who runs the garage always goes away at 4pm on a Friday to go to his caravan in Scotland.  This weekend, he had decided not to go until Saturday (lucky thing #6).  Although part of the pulley system that charges up the alternator had broken off, the belt was intact (lucky thing #7).  We were very lucky that day!  The alternative would have been to be towed back to Edinburgh, cancel our first gig and then make the journey down after it was fixed.  Did I mention how lucky we were?!

We finally made it to Ely in Cambridgeshire for the first night’s stopover at about 11pm.  A very long day, but all-in-all, a lucky outcome!

The next morning we head off via London to the first gig at Upper Beeding & Bramber near Brighton and Shoreham-by-sea.

It gets dark very quickly (and early!) at this time of year.  We headed to the gig to set up.  It was a very clear night and there was a fantastic view of Mars in the inky black sky next to a half moon above the village hall.  Dom’s younger sister Isobel and brother-in-law Francis came to see us, as they live nearby.  That made it a special occasion for us.  We also performed Ian’s new tune “Glenbogle Blues” for the first time – inspired by our visits to the area in Scotland where “Monarch of the Glen” was filmed (see earlier blog entry), and our concerts in “Glenbogle” village hall (at Carrbridge).  It was a very enjoyable gig. An encore was duly supplied!

We visited nearby beauty spot Devil’s Dyke. Amazing views across the South Downs.

We had a few days off before the next gig, so we drove up (through very heavy traffic) to London to stay with Dom’s parents. Fantastic hospitality and great food for 3 days! Great to see Dom’s parents again (Derek & Rhona) – both looking very healthy.  We paid a visit to Dom’s older sister Suzanne and brother-in-law Phil who live just half an hour’s walk away too.

After lunch on Wednesday, we headed down south, through the Blackwall Tunnel again, for our next four gigs.  The first one was at Wannock near Eastbourne.  We parked outside the gig and were immediately recognised by Bryan (who helped organise the gig), walking his very cute & small dog “Rocky“, who was duly lifted up to say “hello” to us!  Bryan advised us that over 50 tickets had been sold and that they were expecting a few more on the door!  In fact, it was sold out!  Brilliant!

It is a beautiful small hall.  Very nice inside.  We were given pulled pork rolls in the break (very nice!).  The audience were very warm, friendly and appreciative.  An encore was duly supplied!

As we headed off the next day, we passed this road!!!

On Thursday we had a look at the famous white chalk cliffs at Beachy Head in the morning, and then a walk along the seafront to Eastbourne’s pier in the afternoon before heading to our gig at Nutley near Uckfield.  Eastbourne is a typical, and very nice, Victorian seaside town with grand Victorian buildings, huge hotels and gardens and squares along the seafront.

We headed on to the evening’s gig at Nutley.  Apparently such celebrities as Piers Morgan and Dame Judy Dench live in the area…..

The audience were unbelievably warm, enthusiastic and friendly towards us! A very enjoyable gig for us.  An encore was duly supplied!  It was also a special night as Dom’s older brother Adrian and sister-in-law Beverley were in the audience.  They live in Vietnam, but are staying in Tunbridge Wells for a few weeks, and have never seen us play before.  It was great to see them.

We headed down to Hastings the next morning (Friday), since our gig was near there at Pett, and had a long walk along the seafront and on the newly refurbished pier.  It had been burned down in fire a few years ago.

We continued walking east and came across the black “Net Shops” which were built to store fishing nets and other gear.

We then headed to Pett, but had time for another beach walk.  We spotted the house that featured in Channel 4’s “Grand Designs“.  The Bauhouse style house is owned by Tom Watkins,the former manager of British pop groups: The Pet Shop Boys (in Pett!!!), Bros and East 17.  It is currently up for sale for £1.5m.  Aparently there are quite a few celebrities living in the area including Paul Merton and Derren Brown.  Paul McCartney has a recording studio in the next village.

On our arrival at the hall, we were made to feel very welcome by Tim Rothwell and his wife.  It was a big hall with quite a bit of reverb.  The audience were again, very warm, friendly and appreciative.  An encore was duly supplied!  Tim’s wife gave us a bottle of New Zealand sparkling rosé wine to take back to our Tour Bus after the gig.  It went down a treat!

It was a bit wet on the Saturday, but nevertheless, we managed a very long walk at Hastings seafront again.  We weren’t able to go on the pier this time though, because there was a fire in the cafe!  Luckily the fire brigade managed to put it out quickly.

The final gig was in Wittersham, just north of Rye.  We had a full house!  It was a very, very, very enthusiastic audience.  We received some incredibly nice comments from them!  It was also very nice to see Paul Ryley, who had been to see us perform in the Edinburgh Festival Fringe in August.  It was a very enjoyable concert for us yet again.  An encore was duly supplied!

Aparently. Paul McCartney has a house in the area (which he comes into by helicopter), and celebrities such as Roger Daltrey (“The Who”), Tom Baker (former “Dr Who”) and Joanna Lumley live in the area.

We headed homeward on Sunday morning, and to break the (long) journey back, we stopped over in Scarborough.  The next morning we had a long walk from the South Bay to the North Bay and back in glorious sunshine!  Then headed back to Edinburgh, experiencing some very heavy rain around the Scottish/English border.

A very enjoyable and successful 11 day tour, and the last one of the year.  (Although we have one more gig at Gateside Memorial Hall near Cupar in Fife on Sunday 9th December).