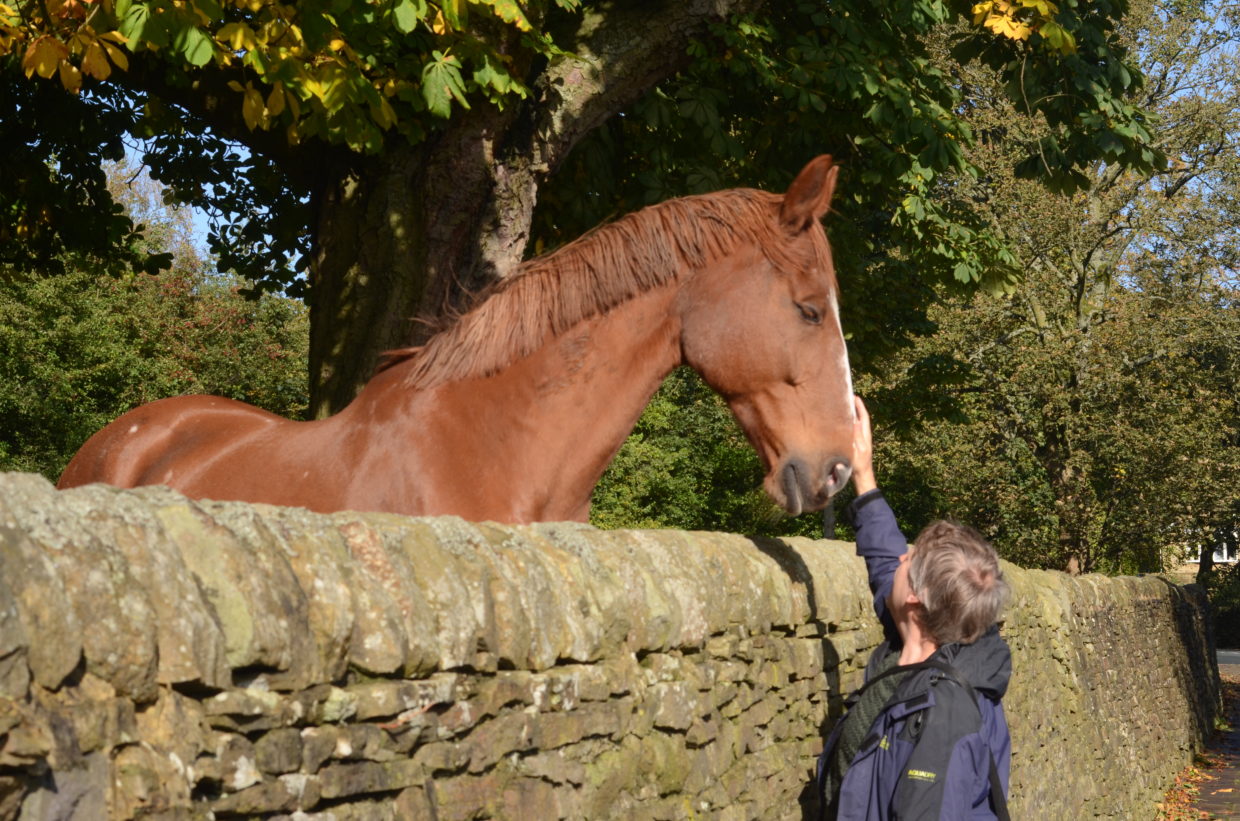 As autumn arrives (although its been so mild that the trees are only just beginning to colour), our October concerts start in the Yorkshire villages of Oakworth and Tockwith. To break the journey up, we stayed in Scarborough on the Thursday night. It was a bit wet in the evening, but we managed a coastal walk. In the morning, although raining again, we had a short walk at the North Bay. We saw a van arrive and a team of people from the SeaLife Centre unloading a large, heavy crate. There was a seal stranded on the beach! Apparently, they had been aware of it for a few days, but weren’t able to reach it. This morning though, it had become stranded high up on the beach as the tide went out. It was very old and injured. It had cataracts too. Sadly, they were taking it away to have it “put down” – the kindest thing to do in the circumstances. They were very skillful! They somehow managed to coax the large seal into the crate very quickly and easily!

We headed over to Oakworth, near Keighley (pronounced keeth-lee) in West Yorshire for our first concert. It is a beautiful part of the country. Very hilly with towns and villages set in deep valleys or on the side of hills. Its name comes from the fact that the village was first established in a heavily wooded area.

The acoustics were very nice in the village hall, and the audience were unbelievably enthusiastic, friendly and welcoming. We received a great response from them. An encore was duly supplied! People came up and talked to us at the end and said some very, very nice things!

In the morning, we drove down to the Co-op for croissants and then walked down to the railway station. It was where the classic children’s film “The Railway Children” based on Edith Nesbit’s book, was filmed in 1970. It starred Bernard Cribbins and a very young Jenny Agutter, Sally Thomsett and Gary Warren. The station looks much the same now as it did in the film. They do re-enactments of some of the scenes with actors for the tourists. After purchasing a platform ticket for just 50p, we were lucky enough to see a steam train pull into the station when we were there.

Here’s a couple of short videos I took and put on Instagram, showing the steam train arriving and leaving Oakworth Station on Saturday morning, in glorious sunshine.

Here’s a short excerpt from “The Railway Children” showing Oakworth Station. The train is called “The Scots Flyer” and there appears to be a bagpiper on board!

After all this excitement, we headed on to our next gig, at Tockwith near York. I had been looking forward to playing here since August. At one of our Edinburgh Festival Fringe concerts, four people turned up and said “You’re playing in our village in a couple of months!“. We never experienced that before! They were very warm & friendly and said they really enjoyed our concert. It’s unusual for us to perform in a village we’ve never been to and yet know four of the audience.

We arrived early afternoon, and had a look around this beautiful village. There has been a village there since at least 1086, and it is mentioned in the Doomsday Book (when it was called Tocvi). We took some photos of the village, including some of The Church of the Epiphany, with its unusual round spire. Whilst we were there a man who had just left the church did a u-turn in his car and asked us if we would like to have a look inside. He turned out to be Derek, a church warden. He asked what brought us to Tockwith, and when we told him he said “I’m going to your concert tonight, and I’m really looking forward to it!“. (So we now new five people that were coming to the gig!)

At the far end of the village, there’s a monument in memory of those killed when a Stirling Bomber crashed in the village on 9th October 1945, as it approached the airfield at RAF Marston Moor.

We looked for a layby to stop in to eat our dinner. To our surprise, the one we found just happened to be at the site of the Battle of Marston Moor! The battle was fought on 2nd July 1644 during the First English Civil War. It was the biggest battle of the Civil War, and the largest battle ever fought on British soil. It was fought between the King (Charles I) and Parliament for control of the country. In April of that year, the Scottish and Parliamentary forces besieged York. The King’s nephew, Prince Rupert led a Royalist army to relieve the city. He wanted a battle, so advanced after the retreating enemies, who then decided to stand and fight at Marston Moor. Prince Rupert had 18,000 men. Oliver Cromwell led the Parliamentarian side, with some 28,000 men, and won. After a battle which only lasted a couple of hours, some 4,000 of the Royalist side died, and hundred’s on Cromwell’s side. They are buried in mass graves in these fields. The battle confirmed how a well-equipped and trained army could win the war and established Cromwell’s reputation as a great commander. The Royalists effectively abandoned all control in the north of England. The road that runs between the two sides of the battle was there at the time (although it probably wasn’t tarmac!)

Click here to read more details about the battle

That evening we headed off to the gig in Tockwith Village Hall which used to be the village school. It was a full house. Very, very friendly people again. We were very well received. An encore was duly supplied.

We headed off on the following Friday to our next gig in Riding Mill near Hexham and Corbridge in Northumberland. It rained quite heavily for most of the journey, but we were met with a warm welcome (and a cup of coffee) in the Parish Hall. Its a beautiful old hall with an amazing oak beamed ceiling. An extension has been added to the building and fits in very nicely.

It was a very enjoyable concert. The audience were warm, friendly and apprediative. An encore was duly supplied.

We had a long drive – some 200 miles – to get to our gig on Saturday in Kirby Bellars in Leicestershire, so we set off fairly early. The village is mentioned in The Doomsday Book, where it was then called Chirchebi. The artist David Weston lived in the village. He was particularly known for his painting of steam trains.

Another beautiful hall. It’s a bit Tardis-like since it is much bigger inside than it looks from the road in this pleasant, one street village near Melton Mowbray (famous for its pork pies!). We were delighted to chat to one gentleman in the interval who had relatives in Tayvallich on Loch Sween in Scotland where we had played in June 2018! Click here to look at our Tayvallich blog post.

After the 300 mile journey home on Sunday, we were to return to Leicestershire the following weekend. We try to make tours so that they move in a smooth direction, but sometimes we have to travel a lot because we can’t necessarily get the dates to line up. So on Thursday, we drove to Scarborough for an overnight stop to break up the journey. It gave me an opportunity to run on Friday morning. It was still “British Summer Time” and two days before the clocks went back an hour to Greenwich Mean Time, so when I set off for an 8 mile run at 7am – it was still dark. It was very cold, but beautiful. There was a gradually increasing burnt orange strip of sunrise where the sea meets the sky, and there was the silhouette of the ruined castle on the headland. As the light increased you could also see silhouettes of dog walkers down on the wet beach.

As I ran along the Cleveland Way towards the harbour, I was lucky enough to see a large seal swimming in the bay. At the harbour, there was a lone turnstone skittering around at speed on the pavement. Indeed, it was still there when I returned on the homeward leg 40 minutes later. I also saw a cormorant drying its wings on a slipway into the harbour in the weak October early morning sun, and a prominent rock which looked remarkably like Donald Trump!

After a smugly deserved poached egg on toast, we travelled onwards to the gig in Twyford. It was a very slow journey: very wet, the end of the school holidays, and well….just heavy Friday traffic.

The Leicestershire countryside is very beautiful and scenic. Twyford is named after the two fords in the village. The St Andrew Church in the main street is a Grade I listed building, parts of which date back to the 12th century.

We were treated to a delicious home made meal by Joy before the gig. It was a very enjoyable concert. The audience were very warm, friendly and appreciative. An encore was duly supplied! We stayed in the driveway of the organisers Joy & Chris, who showed us great hospitality with whisky & beer. The very knowledgeable Chris has a huge jazz CD collection, and has made recordings for (amongst others) Stan Tracey and Evan Parker.

Boy, did it rain that night – very, very heavy rain throughout the night. It is fantastic to sleep in our Tour Bus in the rain though. It keeps you in touch with the natural world as you listen to the rain on the roof…..and drift off to sleep.

The next morning as we left the village, we had to negotiate a very deep puddle across the main road. Joy told us that by that evening, the road was impassable due to the flooding.

We headed back up north, some 200 miles or so to our next gig in Cowshill near Bishop Auckland, situated at the top of Weardale in County Durham. It rained all the way until we reached the North Pennines – designated as an Area of Outstanding Natural Beauty…..and the sun came out!

Our concert was in the small village of Cowshill, where the hall is shared by the villages of Cowshill and Lanehead. It was packed to the rafters! You couldn’t have fitted another person in there! Very nice people. There were many musicians in the audience too: a concert pianist, a flamenco guitarist, and someone who toured with Roy Orbison! We received a very warm reception and an encore was duly supplied.

The clocks went back an hour that night to Greenwich Mean Time. We were very glad of the extra hour’s sleep. We were also blessed with glorious sunshine all the way home as we drove back to Edinburgh on the A68 with its steep hills and hidden dips. As we drove through Jedburgh, we saw runners of all shapes and sizes competing in the Jedburgh half-marathon.